My third day of college I was practicing my baton twirling in an open gym on campus.  It was a smaller campus so the open gym was also the gym used by all major athletics.  This was a rare moment that the entire gym was silent.  I was just messing around, I didn’t have any intention of twirling for the college, I just wanted to work out.

Twirling is a rare sport and when you practice people will stop and watch.  This day, I could see there were plenty of people that walked down the hallway… but then there was this shorter man, not a traditional “college age” guy, wearing a white shirt and tie.  He walked past the doors and then walked backward to watch.  After about a minute he came in the gym.  He introduced himself as the athletic director of the campus and said, “you’ll do this at the game on Saturday” and thus my twirling career kicked up a notch.  Had this encounter not happened, I would not have continued practicing and competing.  I would not have twirled at the Super Bowl nor would I have won a national title.

This opportunity was small. But I said yes.

I was prepared for this because my coach told me at age 11, if anyone asks you to perform you say, “yes.” She meant the people walking down the hallway… when they watch, do something worth watching.  She was right.

No opportunity is too small.  However, do not go against your own values.  For example, I get people that write in asking if I’ll donate a dog collar for their charity.  I have no idea who they are, they’ve never bought a collar, and quite frankly, no.   Does this go against my believe in not turning down a small opportunity, absolutely not, if it feels like you’re getting used, you probably are.

Here’s how to control the “free” and “charities”.  Create an application that includes a one or two paragraph essay.  On the application specifically state the charities and causes you support.  That means you need to pick a cause/charity that is in line with your beliefs or your business beliefs.  It is a good to give back.

BTW… this technique works fantastic when someone asks for a donation, and it’s the 8th person this month, you can say here’s my application.  Trust me, they won’t fill it out.  You do NOT need to give to every person that walks in your door.  However, I actually give “points” to those that make an in-person visit… people actually fill out my online form and ask for donations!  How lazy can you be?

Small opportunities add up… this is the reverse thinking of setting a big goal and breaking it into small pieces.  The difference is breaking down the goal puts you in control of achieving the big goal… where as the small opportunity is a surprise and you don’t know where it will lead.  It’s like finding a penny on the ground.  It’s small and you pick it up.  Now double that every day… by day 28 you have a million dollars.  Don’t believe me?  Click Here!

Don’t walk by that penny! (Here’s another way to make a million dollars by breaking things into smaller chunks)

Action Step
1- Create a donation application for your business.  Come up with the charities and causes you support.  Then create an application that highlights the goals/values in alignment with your business in addition to a one to two paragraph essay question.
2- Be on the look out!  When an opportunity presents itself… say yes!
3- Install my free app! (SmallBusinessClubApp.com) 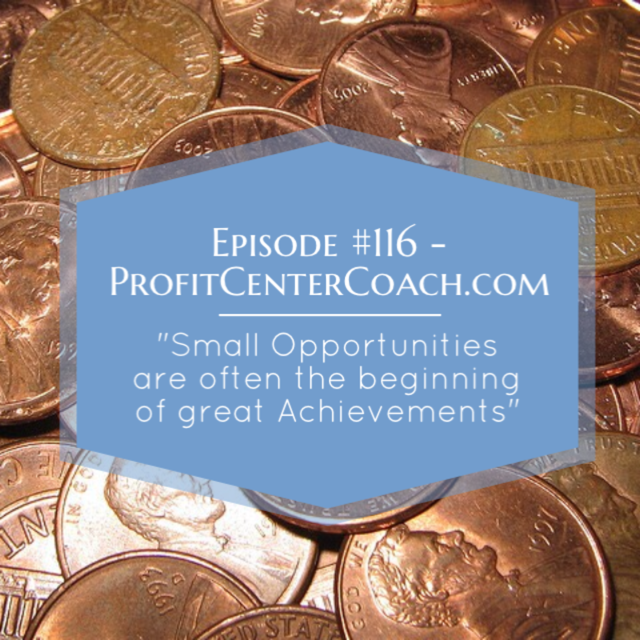 Two ways to get more Small Business Tips …
A- Install our Free App (SmallBusinessClubApp.com –Apple or Android )
B- Subscribe to my blog at BigFishIdeas.com